The cheapest hotels you'll ever find in Japan!
July 3, 2016, written by Michiko 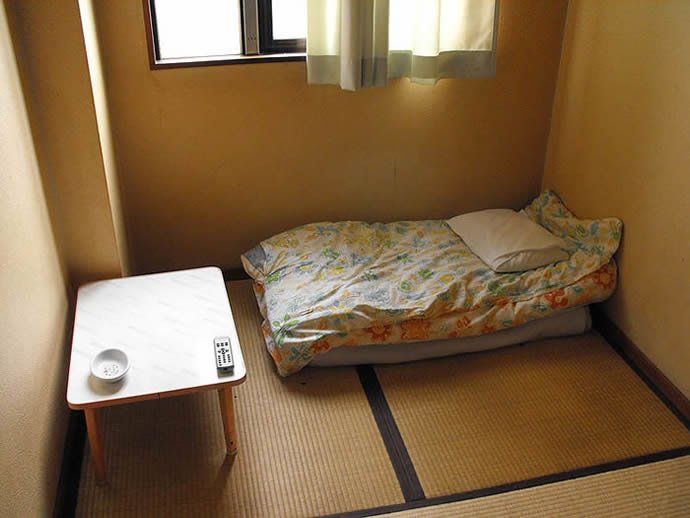 Yeah, that’s right, you can get a hotel room for only $10 in Japan! Its true!

They are called ‘doya’. Basically it is a slum hotel. You only get one little room, and it is old and might smell bad. There is no bathroom. You must leave your room and go to a shared bathroom/toilet/shower area. It is basically a small room the size of 3 tatami mats.

Where can I find Doya?

Doya can be found in the downtown of large metropolitan areas. Osaka, Tokyo, Nagoya, all have some poor slum areas, it is here where you can find these Doya hotels.

No! Stop listening to the internet! Japan is not dangerous. It is one of the safest countries in the world. If a Japanese says an area in Japan is dangerous, that is only relative to their idea. The most dangerous areas in Japan have the same crime level as the average safe cities in the USA.

Of course, if you are a girl and you are outside at night and alone it is not a good idea, this is true for any metropolitan area.

And yes, there may be some Yakuza nearby (there are usually many Yakuza offices in these parts of town), but just don’t be stupid and don't cause trouble. Be polite and be good and it should be fine. If it is late at night and you see gathering of people, you should avoid them, as it may be a drug deal. Generally, both men and women should not be out late at night in these areas, because that’s when things get a bit weird.

The prices for your Doya will vary from place to place. The average is 1000 yen but it can even be a little bit less or more.

The Doya was originally made for all of the labor workers in the area who could not afford to have their own apartment, and their work was not stable so they needed something with a low commitment and low price. These men were mostly construction workers.

As more and more tourism came to Japan and it held international sporting events, Olympics etc, it became more and more common for budget travelers to come to these parts of the city and use the Doyas. So, it will not be strange for a foreigner to show up and ask for a room.

It is a simple old style Japanese room with 3 tatamis and a futon. That is all. Some of them will have a TV and a table, some will not. Also, it is not uncommon for the room to smell of stale cigarette smoke.

This article was written by Michiko and Translated by Cameron

They're called 'Recycle Shops' or as Aussies would call 'Op shops', and they are a vintage and fashion lovers paradise....Read me!

I bet you have NEVER heard of this, ever! That’s right! You can ride some trains for free in Japan! Is it illegal? Maybe!...Read me!