A Coke & a Pancake 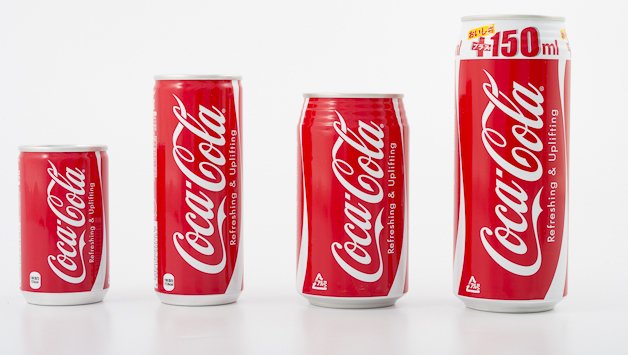 We’re going to talk about Coke-a-Cola.

Oh, my Japan. You are an un-ending fountain of fascination, from which spews perplexing paradoxes.

Imagine a standard eight ounce can of coke. In the US, its what? Sixty cents? Seventy five? In Japan its one hundred Yen; which, with the current exchange rate would be about ninety eight cents. Ok, not bad, nothing weird.

But wait, it about to get weird

When you’re at your friendly neighborhood vending machine, in Japan, you’ll notice the standard cans of coke (8oz) for 100 yen. And then, right next to it, in the same machine, you will see a much larger can of coke (13oz) for 100 yen.

Now that we have established the facts, we can calm down, and coolly analyze them.

This is obviously a promotion by Coke to get more sales by making a really good offer. But let’s look beyond that, and see if there is any deeper meaning.

If such a product line was present in the US, there is no doubt that NO ONE would ever buy the standard 8oz soda again, and EVERYONE would buy the larger 13oz bonus soda instead. Why? Because its bigger and its free.

This is part of the mentality in the West: we want it, and we want a lot of it. The bigger the better. We want to get full. Even if we don’t need it, we still want it.

If there is a bonus and we don’t need it, we’ll still take it, because we want it all.

Ok, I hope that made sense. I’m not saying there is anything wrong with that view point, or Americans are bad, nothing like that. All I’m saying is: that is a typical way people in the West think. (I myself included!)

Now, let’s look at the mentality of the East. Particularly the Japanese: I want what I need right now. I only take in what I need. If I am really thirst and need the big one, I’ll get the big one. If I only need a bit, then I’ll get the normal/small one. I don’t need extra.

Don’t believe me, that this is the Japanese way of thinking?

Allow me to enlighten you…

Here are just a few examples of this principle in Japanese culture:

So you see, the Japanese take only what they need. They do not take as much as they can get.

This whole conundrum with coke is best explained by the size of cups in Japan.

Nearly all cups in Japan are very small. Think of those short glass ones you get in your hotel room, but even a bit smaller. Why?

Because: one cup will be enough for one full drink. If I want more, then I will refill. THIS is the mentality and underlying reason to the Coke Conundrum. Take what you need, and if you need more, get more.