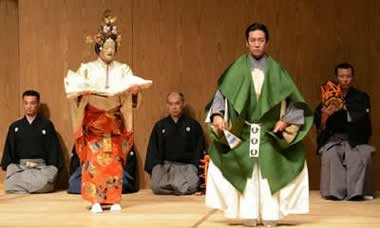 It is no surprise with 1000 years of social development that Japan is rich in culture and traditional forms of entertainment. From knee-slapping manzai comedy to the intricate and elaborate kabuki theatre.

Classic Japanese stand up comedy, with its roots in the 1000s but didn’t reach its present day form until shortly after World War II. The form is comparable to the West’s “Funny man & Straight man”. Where one comedian is making ridiculous remarks and sentiments, and the other comedian pokes holes in his logic and makes him look like a fool. Acts are performed on stage, with no props.

Japan’s most famous and beloved manzai duo are ‘Downtown’, who ruled the Manzai scene in the 80’s and 90’s.

Since the humor of Manzai is based heavily on cultural references, Japanese puns, the Japanese language itself it may be hard for a foreigner to see the humor of the skits.

A form of stand up comedy where a single performer will sit on stage with on props but a Japanese fan and a handkerchief and proceed to tell a story (playing all parts himself), and at the end of the story the punch line is dropped.

Performances can last from twenty minutes to one hour.

Rakugo began in the late 1700s and reached its current level of popularity in the Meiji Period. (late 1800’s to early 1900’s). At that time it was more popular than Manzai, but manzai has since eclipsed Rakugo’s popularity.

Originally a festival and dance in order to welcome the dead spirits, its religious significance has lessened over the years and has become more of a celebration of summer and public entertainment (much like Christmas has become in the West).

Although the dances are different for each region typicall there will be a large and high wooden scaffolding with musicians inside playing the music, and dancers dancing in a clock-wise movement. Then on the street, the public dance in a circle around the scaffolding.

Yosakoi or “come at night” as it is translated, this energetic and exciting night time song and dance performance didn’t stay long within the island of Shikoku, where it was originally created. It is now become a standard part of summer time entertainment for all cities in the country, where schools will make Yosakoi teams and will perform them during a summer festival.

The music played during a Yosakoi performance is usually a West & East Fusion, with keyboards, electric bass, guitar and then traditional instruments such as shamisen, shakuhachi and taiko drums. The music itself is lively and fast paced. Performers dress in vibrant traditional garb, which lends itself to the energetic music.

This very popular form of traditional Japanese theater was first codified in the 1300s, and seven hundred years later is still performed today. It is easily recognized by the rather large figure of the main character in the center, wearing many robes and a mask.

The Noh format itself is highly codified and precise; while there have been branches which try to evolve it, the art remains unchanged. Even the fact that performers are always male, and should there be a female role it will be played by a male.

Like ‘Noh’, Kyougen is another form of classic Japanese theatre, the difference being Kyougen’s purpose is to make the audience laugh. This comic theater was used during intermissions between acts of Noh plays, however Kyougen can be performed as itself and not part of Noh.

Kyougen plays are brief, averaging only ten minutes, and have elements of satire and slap stick comedy. Kyougen acts are much less restricted than Noh, resulting in a great variety of performances.

These puppet shows bare little similarity to their western counterparts, for there are no strings, and the dolls are almost life sized, AND they are operated by two individuals dressed completely in black. In order to be truly appreciated it has to be seen in person.

Its not just sumo wrestling and puppet shows in Japan, oh no, state of the art entertainment abounds in the land of the rising sun.

This pin-ball type machine where one seeks to collect as many steel balls he can in order to exchange them in for prizes has its beginnings as far back as the early 1920’s. But these mechanical pachinko machines didn’t begin to resemble present day until the 1980’s when all the bells and whistles were so liberally applied.

In present day Japan there are over 16,000 pachinko parlors extant. Because players of Pachinko are able to win very attractive prizes (electronics like cell phones, computers) it is seen as a quasi form of gambling. Indeed so as there are some parlors where you can exchange the steel balls for cash. With the structure of the game being the more you play it the higher chances you have at getting a jackpot it because rather addictive.

You can find Pachinko parlors most anywhere in Japan, however they have a strong tendency to take up shop in the ‘seedy’ or ‘dodgy’ parts in town, next door to such fine establishments as night clubs and whore houses.

The Pride of Japan: Karaoke, swept over the world over in the 1980s and is now the unofficial past time of Japan, as well as Taiwan and the Philippines.

The format of Karaoke in Japan (and Asia in general) differs to that of the west, where in Japan you will sit either alone or with your group of friends in a medium to small sized room, with a pair of microphones and a TV to watch and sing from. While in the West you have bars with a stage and microphone, where the individual performs in front of strangers.

Pricing in Japan varies on location (in the city it is more expensive than the country), and time of the day, where you can pay 500 yen per hour during the day time you can end up paying 1000 yen per hour at night or on the weekends. This has resulted in people going for a Karaoke Quickies during their lunch breaks. As many parlors are open 24/7 there are usually ‘all night’ deals where the customer will pay a flat fee and have the whole night (11pm – 7am) to sing, or sleep for that matter.

Karaoke’s omnipresence is something to behold, as it is hard to find a train station or commercially zoned area that does not have a karaoke parlor near by.

It is important to note that Karaoke is enjoyed by ever single demographic and age range in Japan, be it children after school, or business men after a days work.

The Japanese game center mirrors that of the west, big loud flashy games, some of them from which you can win prizes. They are most popular and almost exclusively used by the youth. Game Centers are always found at malls or train stations. Westerners will get a few kicks out of the Game Center, with games like ‘taiko drumming’ and other marvels like ‘glamour’ photo booths or ‘purikara’ as they are called. You can get professional photos of yourself done with extras like air brushing and eye enlargement.