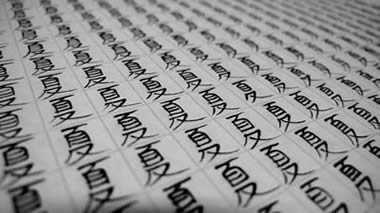 As incomprehensible and strange as it may seem, the Japanese language (spoken and written) is not so bad. Indeed a glimpse at the chicken scratch writing may tell you otherwise but that is only because you’ve never had a formal lesson in the writing system. It is beyond the scope of this article to provide an introduction to Kanji (the Japanese picture-based writing system) However we will introduce you to some concepts and key differences with Japanese and English.

There are a few sounds that are not present in the Japanese language, which ends up give the natives a hell of a time when they attempt to speak English. It also creates a distinct ‘Japanese English Accent’.

This ends up sounding like: The love light is on = za rabu raito izu on. Good Lord! What a mess that is!

Fortunately for Americans learning Japanese it is far easier learning their sounds. There are only two sounds that they have which we dont:

‘ryo’ is rather difficult, you have to roll your tongue to create a ‘ri’ sound, and then tack on to it ‘yo’ the end product is a seamless: riyo.

The Japanese language has only one consonant: ‘n’. Everything else are pairs of consonants and vowels, or just vowels. For example:

This covers the core of the Japanese language phonetics. There are others which are combinations of ‘y’ pairs with other pairs such as: ki + yo = kyo. (like Kyoto) but we will keep it simple. As you can see by looking it over there are many sounds missing!

Can you speak japanese? = Kyan yu supiku japanizu?
I don’t know how to use a computer = I dontto undasutando hau chu yusu konpyuta
If you want food, tell me = Ifu yu wantto fudo teru mi

Yes you read that correctly, the Japanese do indeed speak backwards compared to English, by putting their verb at the end of the sentence and the subject at the beginning. German has the same thing.

What does this result in?

This is the toughest barrier for foreigners to overcome in their braving of the language. It takes extensive drilling, as well as a study of the grammar to learn the sentence structures. It is NOT all random, there are formulas behind the position of the words, so don’t despair. You can learn it!

You may be surprised to discover that Japanese has a significant amount of loan words from other countries: China, Spain, USA and more.

For example: have you ever wondered why the Japanese say: “sayonara” ? Well now you know. It continues with words like ‘pan’ for bread. The most amusing aspect of this is the Japanese aren’t even aware of the Portuguese influence in their language. (this phenomena of ignorance is also shown in their misconception that Croissants are Japanese along with 7/11, Tiramisu, hamburgers and others).

A simple example of this could be:

It should be noted that Japanese does not have to be written in Kanji, it could all be written phonetically, using Hiragana or Katakana. However the homonymic nature of the language makes this unwieldy. Therefore Kanji is preferred wherever possible.

You can also write Japanese phonetically using the English language, as shown in the above example. This is called ‘romaji’.

If Japanese wasn’t hard enough there are a dozen dialects used regionally. Some of them so different that other Japanese cannot even understand them. Don’t let this worry you however, as every Japanese can speak ‘Standard Japanese’, that which is spoken in Tokyo. Generally a person will learn the local dialect of their city, and then learn standard Japanese in school.

This even goes to the level of variations by city, while this isn’t always the case it can be expected for the language to alter outside a 80 mile radius.


The funnest part about Japanese dialects are the different quality or atmosphere that they imply. Of course this is a very gross generality, there are stereotypes associated with people from particular regions, and with the way they speak.