[How to make a pretty girl look like Gollum]
July 3, 2016, written by The Captain

It’s the little things like ‘purikara’ that make you feel like you’re in a different world. It is a Japanese portmanteau of the two English words: “print club”.
Print = Purinto
Club = Kurabu
Print Club = Purikura

Ok, enough etymology, let’s get jiggy with it.

If you send your mind back to the 90s you’ll remember that photo booths were some-what popular. Young teen-age friends or couples would hop in, make stupid faces, get a bunch of random photos taken, and be on their merry way.

Well, the purikura is a souped up Japanese photo booth on steroids and hallucinogens. Purikura is also the style of photo the machine makes.
Example:

Joe: “Oh my! Her Facebook profile consists only of purikura! I have no idea what her face actually looks like!”
Bill: “bummer dude, the struggle is real!”

Ok, enough of that.

When one draws aside the curtains and hops into the purikura booth, one will have their photo taken, multiple times. A screen in front of you will recommend various idiotic poses. Such as:

Next, you will edit each photo, one at a time. During the editing phase you have the chance to:

The machine will automatically smooth out your skin and give you a highly airbrushed appearance, you will look slightly cartoonish.

Some machines automatically enlarge and ‘sparklify’ your eyes, giving you no say in the matter! Effectively making you look like an alien prostitute.

The end result is something to behold and to be horrified.

Where can I participate in this tomfoolery?

Lucky for you! Any Japanese shopping mall which has an entertainment section (pinball, arcades) will also have several different purikura machines.

How much does it cost?

It varies indeed! Be prepared to spend 1000 yen for a set of photos.

Who even does this?

Why is it so popular? 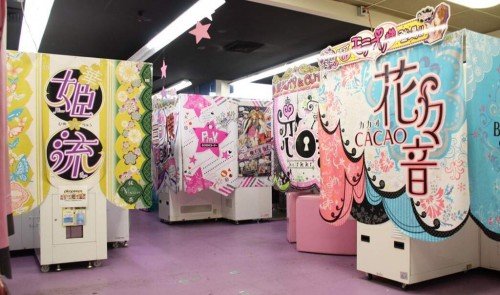 I have NO idea. But let’s speculate.

What is the future of purikura?

Anyone with a smartphone (android or apple) can tell you that there are loads of apps these days which essentially obviate the need for a purikura machine. (except for the printing)

My prediction here, is that you will see a gradual fade out of their existence. Much like “blockbuster” and “coinstar”. But they will remain in Japan for many years to come, there will just be less. And instead of arcade’s having 10 different purikura booths, there might be one or two.

Basically, the closest thing you’ll get to a proper oven in Japan is souped up toaster oven....Read me!