Buckle-in! Its about to get weird
July 3, 2016, written by The Captain 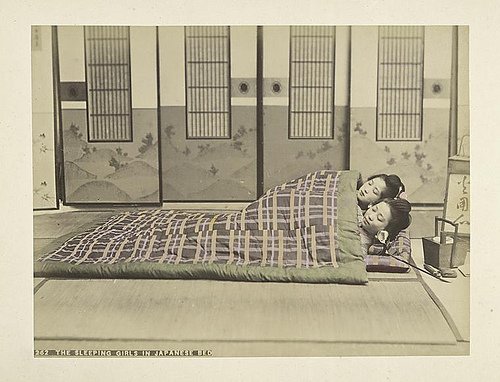 Just when you think you’ve got Japanese culture taped, squared away, understood; you discover something like ‘yobai’.

Way back, over a hundred years ago before Japan got totally industrialized, and was in more or less a ‘feudal’ era (pre 1900) life was pretty different.

As you could imagine, you couldn’t just go to your local Chili’s to meet someone, much less bust out your Tinder and start swiping for matches.

No, things were much more restrictive, especially if you were in the country-side.

So, how could a man find himself some pleasurable company? He could go to a prostitute (baishunfu) that was standard. Sure, in a city. But what if he lived out in a rural farming village? Not much he could do, other than start knocking on doors and asking if he can have sex with the daughter…

A custom in Japan where a man sneaks into a house, to a married or un-married woman’s room, asks her if he can do her, if yes, they go at it. If she says no, he is ashamed and scurries off. All done quietly and secretly, with no one else the wiser.

This custom varied greatly between regions. In some, only local villagers could participate (no travelers, or un-known people). And in others only un-married girls could do it. And even some allowed only married women.

It was quite common indeed and could have been considered part of the ‘dating process’ as sometimes the two who “yobaied” would get married.

This made it easy for women in a rural setting to have as many partners as she wanted, without any attachment or relationship.

It also allowed men in the rural setting to take out their desires on said women.

I suppose it’s like a Booty Call, but more of a Booty House Call, but done secretly, to someone who might not even suspect it.

Knowing that it is nearly impossible for Japanese people to tell someone ‘no’, I do wonder, how many women in a ‘yobai’ situation actually were able to say ‘no’ to their visitor/pervert. And how many said no and the guy actually complied and left!? Being an overwhelmingly man-dominated society it is easy to assume that much of the yobaing could have been non-consensual, and basically rape.

A less weird scenario, and closer to our modern day, would be a couple who knew each other, perhaps through some festivals, or family business, and who have taken a fancy to each other, but publicly they are not able to meet and they wish to have a ‘lover’s tryst’. In this case they would setup a yobai to have some private intimate time together.

But this could definitely occur without them discussing it, and the man just shows up as a surprise.

“Surprise! Remember me? I buy milk from you every week! My name is Daisuke, and I ‘dai suki’ you! Since we’re both here, and naked… you want the D?”

Did I tell you Japan is kind of perverted?

Yobai has such deep roots that it is a favorite fantasy of Japanese men; to approach a woman who is asleep, and have sex with her. This scenario is used constantly in Japanese pornography and is even an available ‘scenario’ at some houses of prostitution.

John: “Yes, I’d like that girl with the short hair.”
Staff: “Yes, sir, excellent choice. And what scenario would you like? We have:

Fortunately, this madness no longer occurs. And if it does, it would be in only the most redneck village possible.

Yobai has been replaced with reputable modern systems like: Tinder and Ashley Madison. (insert laugh here).