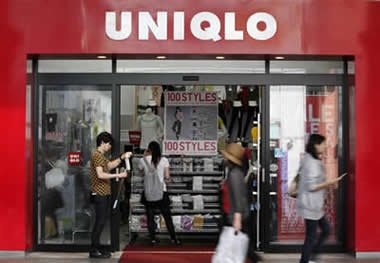 If living in Japan at some point you will want to replenish your raiment, and rightly so, Japan has some of the coolest and fashionable clothing you can find.

Clothing in Japan is rather straightforward, the only thing to be mindful about is the noticeable difference in sizes. If you think you are ‘x’ size, then get the next size up. (unless it is of course measured by millimeters, in which case you would not need to compensate) If you needed a medium t-shirt, then you’d best get a large. This is also very evident in women’s underwear as the bust of Japanese women is much smaller compared to their American counter parts.

One thing Japan does not have are retail chains which are dedicated to stupid low prices. If you want to find really cheap clothes in Japan ($10 pants, shirts, blouses, etc) you’ll have to go to second hand boutique shops or buy online from Japanese Ebay.

Another place you can find cheap clothing are at outdoor shopping districts/markets, where you can haggle the hell out of the vendors. (For example: Shinsaibashi, Osaka, or Harajuku, Tokyo)

But generally the cheapest clothes you will find that are of some quality will be at the department stores in the malls. A department store will always have its own clothing floor just like they do in the USA, and then other independent stores like The Gap and Banana Republic, where you will pay more.

A retailer which seems to bridge this gap is the omnipresent and omnipopular “Uniqlo”, Japan’s answer to affordable yet somewhat fashionable clothing. Think of it as just a shade lower than the Gap in quality and style and you’ll be about right.

If looking like everyone else isn’t your thing, and you want a few more measures of style but don’t want to pay for it; then rejoice for Japan has an abundance of Zara retail stores, which are a staple for affordable yet modern clothing. While not as omnipresent as Uniqlo, you will find a Zara in any city of measure, with over seventy stores nation-wide. (Twenty of them being in Tokyo, which is twice the amount of Zara’s in California.This adds some perspective to Japan’s fervor for this particular retailer)

Of course it doesn’t end with just Zara if you make your way downtown to your nearest major city’s shopping malls you’ll find a dizzying array of independent and small chain retailers, covering every possible fashion taste and avenue. Whether you want to dress in the latest fashions or like a sleazy Japanese hooker, rock star, cowboy, sugar fairy princess, high school girl, or anything else, you’ll be able to find a shop that caters. The only caveat being you will have to pay a few bucks for it.

Something to note about Japanese shopping malls, is they are not sprawling two-flour expanses like those in the US. Since land is exorbitantly expensive, the only answer is to build up and the result are stout 10 flour shopping centers.

Be prepared to not have an English speaking cashier whenever you go to pay for your new threads, but fear not just give them a bunch of money and let them give you back your change and a receipt. The worst things will get is if they ask you if you want the receipt in the bag and you’re just blank.

Unless the store is a chain, and it is in a department store it MAY not have a credit card processor. Always be prepared to pay cash in Japan and always take your American Express, I mean your Visa.

Another note is to make sure you keep your receipt. The Japanese are NOTORIOUS for being difficult with exchanges and returns. Keep your receipt and keep the tags on, otherwise you won’t be able to return. Also, some stores just plain won’t allow returns.

If you’ve been in Japan for any measure of time you’ll notice the “OL” (office lady) and the Salaryman (officer worker/ businessman). They dress in standard business attire: black suits, tie and trench coat. At any department store you’ll find a section with these, however they are rather dry. You’ll find more trendy and modern business attire in larger shopping centers.

Disappointingly, the people of Japan no longer wear kimonos and samurai garb in their day-to-day life, but that doesn’t mean you can’t! You’ll be pleased to find that there are still many traditional Japanese clothing stores, even the smallest city has at least one.

Japanese traditional wear has many parts but we’ll keep it simple:

Yukata - a simpler and easier to put on version of the kimono. It is uni-sex, enjoyed by men, women and the kiddies. The only difference being the patterns on women yukata are more floral and colorful, and the patterns on male yukata are very subtle and solid. Yukata are typically worn in the summer to festivals. A decent Yukata will cost you $70 US.

While it is uni-sex they are chiefly worn by women these days (typically elderly women). They are rather complex, with many layers and components, so much that most Japanese don’t know how to actually put one on. Depending on the quality you can get a kimono between $150 - $10,000 US.

Traditionally Hakama are mostly worn by men, or by priestesses but these days they are more frequently being worn by girls as well. They are the bottom “pants” half of the samurai’s regalia. And they don’t cost too much at all, a pair of Hakama should be around $60 US. The top “shirt” half is called Keikogi, and it costs around the same amount.

No Japanese outfit is complete without proper footwear, that being wooden clogs which are raised 3 inches of the ground. They are called Geta, and don’t be afraid they are comfortable and VERY easy to walk in, just don’t go running down the stairs. While the Japanese themselves rarely wear Geta in this day and age (you may see occasionally someone at a festival) that is not reason that you cannot enjoy. You can get a pair for $30 USD.