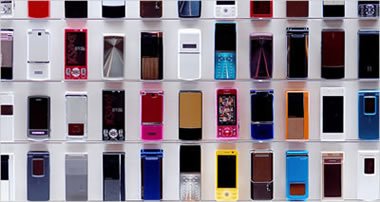 Don’t be surprised when you find out that our apartment doesn’t have internet. Although times are a changin’ there are still many apartments and homes (older ones obviously) which do not come with internet. You have to request the ISP to come out to your property and put in the wiring & give you the modem. They typically take 4 days to come out, and the installation itself takes a couple hours.

The monthly fee for internet in Japan is similar to that of the US, around $30. However you can pay more for more speed.

One thing not to get your heart set on in Japan is Free Wifi. In the US, free wifi is just one of those things you expect from a modern business. The Japanese however are not so generous. Although you can find wifi at Starbucks locations in Japan, they may not be free, and there is a good chance there is a fee.

The reason for this situation is the long standing lack of demand for wifi in Japan. As their cell phones were always able to do everything they wanted there was no need for internet, at least not until the advent of smart phones and tablets which is beginning to become popular in Japan.

While business owners are getting hip it will be quite a while before Japan has the amount of free wifi that can be found in the US. Until that day comes you’ll have to survive some how.

One last item to note on free wifi and cafes, don’t be surprised if you stroll into a Starbucks, buy your cup of coffee obligingly, then sit down to plug in your laptop and discover that the outlet is blocked off... as is all the rest of them. Not every cafe is so stingy however, be warned!

For those who want internet and have a buck the obvious solution is to get mobile broad band. Coming in around $60 USD a month its not cheap, and there is even a 5GB bandwidth limit, which depending on your lifestyle is either more than enough or far too little. Let’s put it this way, don’t expect to stream too much video or music with only 5GB of bandwidth in one month. However if you are mainly just surfing the web and doing email you will be totally fine.

Suggested providers are NTT Docomo and AU.
The sign up process for your mobile broad band (as with cell phones too) is rather lengthy, and can take up to one hour if you don’t know what you want.

Also make sure you have an interpreter with you as Docomo and AU rarely have English-speaking staff.

Japan is and always has been the king of cell phones. Whatever top of the line cell phone you have now (not include international products like the Droid and iPhone) was at its peak two years prior in Japan.

However with the advent of the smart phone, Japanese consumers are turning away from the traditional ‘keitai’ cell phone for something more nifty. Of the 100 million mobile phone users in Japan, 23 million of them are smart phone users and the remaining 75% use standard cell phones. But there is nothing standard about the Japanese cell phone!

Japanese keitai come in all shapes, sizes and colors, with top of the line phones coming in at $600 USD, and these are not even smart phones!

Assuming you want a cell phone that has an English interface, you’ll have to be sure to specify that when you go to the cell phone kiosk. Typically cheap economy phones will not have an ‘English’ mode, therefore you will probably have to end up spending a good $100 for a decent phone in order to navigate your phone in English.

If you’re short on dough however you can find cheap economy plans where the phone itself costs 1,000 yen, and the monthly fee is 2,000 yen. A popular company that has plans like this is ‘Willcom’. There are even promotional plans that as long as you keep your phone call under 10 minutes, you can use your phone as much as you want and it will only cost 2,000 yen a month.

Docomo is the defacto standard mobile phone provider in Japan. They have the largest and most reliable network.

If you want to get an iPhone in Japan you will get it from Docomo.

Without a doubt the most exciting thing about Japanese cell phones is the fact that at participating locations (convenience stores, train stations) you can scan your cell phone to make your purchase. Obviously you’d have set up a pre-existing account and it would be debited every time you scanned your phone.

This is a real life saver when you are commuting on the train and you don’t have a moment to waste.

Anywhere you see a promotion in Japan there will always be an accompanying QR Code (barcode) for you to scan with your cell phone in order to sign up for the special offer. For example:

You’re in front of a Karaoke shop, and there is a banner which advertises joining their mailing list and you’ll receive 20% off your next Karaoke visit. The promotion features a barcode for you to scan with your cell phone. After scanning it, it will redirect you to the web, to a specific address where you will fill out a little form, inputting your name and email. Once you hit send you will then get an auto email with your coupon to present to the clerk. BAM! You and your friends just saved a bunch of yen, and it only took 10 seconds!

Sending mail and packages is rather simple affair in Japan. All you need to know is your sending address and the receiving address of your mail. Preferably you’d have it already written on your package. At which point the clerk (who won’t be able to speak English) will ask you what priority you want to send it, and of course you’ll say: “I don’t speak Japanese”, and they’ll proceed to choose the priority for you, and then indicate to the LED display that you owe X amount of yen. Easypeasy Japaneasy.