Cost of Living in Japan - Food 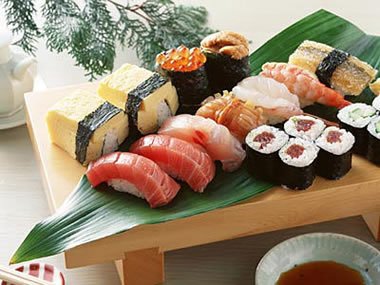 There is a distinct difference in food prices with Japan and the US. It is regulated to a large degree by supply and demand, the import factor (being an island) as well as cultural sensibilities.

This article will be broken into two sections: food at the grocery store and then eating at restaurants.

Its typical for a foreigner to spend a good hour at their first super market in Japan, just comparing prices and gawking at all the curious foreign produce. Some of the things you’ll notice is there is little or no bakery, a tiny desert/ice cream section, and TONS of fish.

The main thing you will notice is that everything is in smaller portions and containers, meaning you’ll have to buy multiple items to equal what you’d buy in the US. For example. A box of Oreos comes with 18 cookies, but a box in the US comes with 40. And they both cost $3.50.

This continues on into things like Chicken. Where the largest package you’ll see is one single chicken breast, and they average $3.00. Whereas you can go to Super Target and get a chicken breast 6-pack and pay $8. Its over twice the price in Japan! It continues, for a whole chicken (IF you can even find one) Expect to pay $20 USD for a small 8 lb bird.

It reaches absurdity with beef, a filet the size of a chicken breast, expect to pay $6 USD. (and this is not filet mingon mind you!) Steak is without a doubt the most expensive meat in Japan. Even hamburger meat is pricey, at $4 for a 8oz package.

Things get even worse in the Fruit Section. Fruit is a luxury in Japan and extravagance, since it is imported it carries with it a high retail fee:

The only fruits that are reasonably priced are apples, oranges and bananas.

However in the Produce section you’ll find the vegetables are rather comparable to those of the US, don’t expect too much difference. .39 for one onion, $1 for a tomato, $1.50 for a head of lettuce…

Interestingly most milk in Japan is fake, whole milk is hard to come by, and is rather expensive. Expect to pay $3 for one liter of 1% skim milk. Eggs are priced similarly to the US, $2 for a dozen.

Cheese on the other hand is expensive and always comes in the smallest of packages. Don’t even think about getting fresh parmesan! You’ll break the bank for sure. The cheeses are pretty close to double the price in the US.

It is funny to note that the average bag of chips in Japan is pretty close to the American ‘fun’ size. And that Japan’s BIG size is close to the American’s average size. These fun size bags cost around $1-2 a bag, and the bigger bags are $4. You won’t find many American brands of snacks, however you will find Pringles uniformly. Expect to pay $3 for a tube of Pringles.

The Japanese Bakery section typically consists of several shelves of plain bread in plastic bags (not baked fresh) but these slices are extremely thick, practically double the width of bread in the USA. Think of it as that really super thick French toast bread you sometimes see. Well that is your average bread in Japan. Expect to pay $1 for a bag of 6 pieces.

The Bakery also consists of donuts, sweet breads, croissant with glazing, fruit turn-overs and more. All around $2 each.

There is usually a section that has freshly made sushi, curry rice, yaki tori (chicken on a stick), fried chicken, and many other snacks, as well as bentos. Here you can conveniently buy your meal without having to make it. Expect to pay $3 for a container of white rice, fried chicken, and a little vege side dish.

Depending on where you are at 9pm at night these items will all go 50% off, as they are always made freshly each day, so go at night and STOCK UP! You can save a fortune doing this.

The Japanese super market is generally more expansive than the American counterpart. However with some diligence you can find what items are the same price or even cheaper and purchase those, and thus save money!

Note: It goes without saying that soy sauce, rice and fresh fish are VERY cheap at the Japanese super market, because there is a large supply, and native foods. You will always save when you purchase the foods of the land.

Out on the town – Restaurants

Its very easy to spend a fortune when you’re out on the town in Tokyo.

Only got 500 yen and need a full meal to fill you up? And you don’t want to go to McDonalds and buy 5 100 yen hamburgers? Your answer is the Japanese concept of fast food (not like McDonalds however), these are real meals, made very quickly, and taste relatively good, however the quality isn’t that high. They consist of things such as curry rice, beef and rice bowl, hamburger patty with an egg on top and gravy and rice, all for around 500 yen. You can find these establishments EVERYWHERE.

Of the American Fast food industry, those are the only three that you will see in Japan. With Burger King and KFC being rather uncommon and McDonalds as omnipresent as Starbucks. They have the same menu prices as they do in the US, instead of the dollar menu it’s the 100 yen menu. You will notice however that the taste is RATHER different from the US… less MSG, less flavor, and less condiments. In fact you are not permited to ask for extra ketchup, mayo, relish, mustard, nothing. It will cost extra.

A notch above McDonalds, these two native Japanese companies offer a wide array of hamburgers with a surprising amount of creativity. A burger costs around $3.00.

You’ll be hard pressed to find a bowl of ramen for cheaper than 650 yen ($8 US) which is pretty expensive for a bowl of soup if you come to think about it. However if you’re lucky your ramen shop will offer a special service called ‘kaedama’ which means literally ‘change noodle’. Some ramen shops will for a small fee (100 yen) give you a whole new batch of ramen noodles for your soup! Just ask them: “kaedama arimasuka?” and they will either say ‘hai arimasu’ or look shameful and explain: “kochira no hou ha yarimasen”, “over here we don’t do that”, or some such non-sense. Point being, if you find a place that does kaedama you can improve your cost value quite a bit. Some shops don’t offer kaedama, but instead just a bigger bowl of noodles, for the same price as the normal bowl! Take advantage of this freebee.

The Japs do love their Chinese food, you’ll find no shortage of Chinese eateries in Tokyo and Japan. You’ll find two main types of shops: sit down restaurants, and take out stands.

For $3 US get a set of 10 dumplings (or gyoza as they are called in Japan) these pork filled dumplings are delicious and CHEAP. You can even buy them at the super market pre-made in packs of 20. Just take ‘em home and heat them up. However they do not compare to the freshly made kind you find on the street. Another item you’ll find at the stand is ‘butaman’ which is a steamed rice bun with a pork filing inside. They will cost around $2 each.

Some stands, at lunch or dinner time will sell bowls of rice, veggies and meat for 350 yen, some are delicious some are not so much, either way it is a very low price for a full meal.

Inside the Chinese restaurant you can order kung pao chicken, beef and broccoli and a plethora of other dishes. However be prepared to spend 750 yen ($9 usd) for your entrée. The entrée will come with rice, soup and a veggie.

Here is where things get pricey. Izakaya are known for their very diverse menus, featuring not only native dishes but a large portion of foreign foods as well. Pizza, spaghetti, French fries, hamburgers, fried chicken, etc etc. Only thing is portions are rather small so you need to order several items to feel like you’ve eaten. Prepare to spend 1100 yen. ($14)

If you have the discipline you can go to a sushi shop and just order a ‘2 sushi’ plate and spend 500 yen, but that’s not likely to happen. To eat the amount of sushi you want you’ll have to spend 1800 yen ($21)

As cheap as it is delicious! Okonomiyaki starts typically at 600 yen for the bacon version, and more if you want shrimp. Its rather filling and pretty big. The irony is its made of mostly cabbage, flour, water and egg… so you could make one at home for 200 yen if you wanted to have a culinary adventure.

Fear not! The Japanese are quite fond of American cooking so you’ll always be able to get your comfort food and reminisce. However… may I warn you right now that its not going to taste AT ALL what you think it will. Much to our dismay the Japanese concept of Italian cooking is horrendously perverse and inadequate. This may be hyperbole, however if you prepare yourself mentally for the worst then you’re sure to enjoy your meal.

Here are just some of the selections on the menu:

Hamburgers
Salisbury Steaks
Steaks
Chicken breast
Soups
Pizza
Pasta (in many variations, the Japanese are RATHER taken by Pasta Carbonera, you will find it everywhere)
Salads (this is the only place you can find American salads)
Curry rice
Sundaes and Parfaits
Tiramisu

Note: they may have a breakfast menu where you can order pancakes, eggs, bacon, sausage, the whole bit

If you think of this restaurant as a Denny’s then you’re on the right track.

This deserves its own section if not only to impart the travesty that is the Japanese Domino Franchise and pizza industry in general.

Not only are the pizzas obscenely disgusting in their toppings and flavors but they are priced ASTRONOMICALLY high. Be prepared to spend $17 for a large cheese pizza, and $22 for a large pepperoni. Or $42 for a specialty pizza with a wide assortment of toppings. What? $42 for a pizza? YES! We kid you not.

If the pizza was delicious and tasted like a $42 pizza should then that would be one thing, but you will find your pizza with seaweed shavings, mayo drizzle and just all around bad flavors.

Your safest bet is to just get a cheese or pepperoni.

Depending on how traditional they are, after walking inside you’ll put your shoes in a cubby, put on some slippers and be brought to your table where you are provided with a cup of warm green tea or black tea. The menu system is simple: there are various sets which include an entrée and several side dishes, most of them seafood. Once you’ve chosen and your server brings out your food on a large tray. It will have around six or seven different cups and bowls, all with different food. This is the Japanese style, many different dishes, all in small portions. Expect to pay 1000 to 1500 yen for your meal.

For higher end dining, at hotels and other fine establishments expect to pay between 1500-2000 yen for your entrée. This could be anything from kitsune udon made with green onions shipped from Kyoto or authentic pork katsu (not the cheap stuff at the store) for 3000 yen.