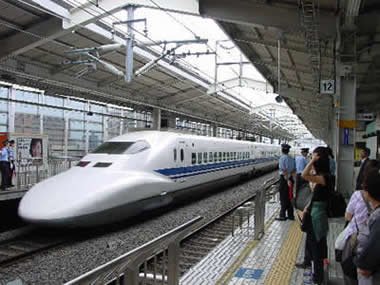 Forget the beautiful scenery and delicious food, what Japan really has to offer is a mastery of transportation infrastructure. The entire country (excluding Okinawa, which is just above Taiwan) is on a train grid, from the Southern most cities of Kyushu, to the Northern most prefecture of Hokkaido. What this means is you can literally travel the entire country by train. You just have to transfer at the appropriate stations (however this would be rather impractical and time consuming. There is a point where it is easier on the traveler to take the bullet train or highway bus, like going from Tokyo to Osaka for instance)

This is great news for the foreigner as Japanese drivers licenses are a pain the in the arse, and are absurdly expensive to maintain.

But its not just trains, city and inter-city bus systems are world class. In fact, bus is the standard way that locals use to travel between cities and the country itself, as train fairs are rather expensive. While indeed you can take a commuter train from Tokyo to Osaka, you would have to do transfer four times, and spend ten hours in transit, and spend $150 USD.

The better option is to take the bullet train, with no transfers, and get there in 2.5 hours and spend $110. Or do what the locals do, and take the midnight bus from Tokyo to Osaka. Buses typically depart around 11pm, and arrive 7 hours later.

Aside from Buses, Bullet Trains (Shinkansen) and Commuter Trains, Japan’s major cities all have subway systems of varying sizes. Some big like Tokyo and Osaka and some small, with only two lines, like Kyoto and Yokohama.

Although there are other train companies, the big boys on the block are JR (Japan Railways Group) Of the 27,000 KM of rail in Japan, JR operates 20,00 KM of it. With a national network split up into six regions:

You’ll find that fees on JR lines are the most inexpensive, as they can afford to take the hit and offer low prices. This is most evident in ‘loop’ lines, which go in a circle around the whole city. Such as those in Osaka and Tokyo. A ticket to travel around the whole city will only cost you 190 yen!

Whatever you do, DON”T get a car in Japan, you’re in for a nightmare. If you must have your own transportation, by all means get a scooter or motorcycle, but don’t get a car! In the case that you live out in the country and don’t have excellent train coverage then you may be forced to succumb and become a motorist in Japan.

Reasons why to not have a car in Japan:

If you’re American then you are out of luck, you’ll have to take a theory and practical exam in order to transfer your American license into a Japanese one. And it is not easy! Taking several attempts are considered normal.

For steps on how to get a Japanese driver’s license please visit the following page:
http://japan.usembassy.gov/e/acs/tacs-drive.html

Unveiled in 1964, Japan’s Bullet train was the first and continues to lead the world in bullet train standards. For those with a buck, it remains the preferred way to get around Japan. The Shinkansen covers all of Japan (except for the island of Shikoku) from Kagoshima in the South to Sapporo in the North.

This fast and convenient transportation comes at a price however. A one way ticket from Osaka to Tokyo will cost about $100.

Only Japan’s largest and densely populated cities have municipal subways. As you would expect subway lines are typically limited to the municipality and don’t extend further beyond that. There are some exceptions however.

The only down side with subway lines is they are all ‘local’. Meaning there is no express or rapid express option, therefore you must hit every station on a subway line. Therefore the trip on the subway can be a bit long. Aside from that the other downside is subway fees are always more expensive than regular trains, with a trip costing 310 yen which by train would have cost 160 yen.

Rail coverage is so good that you will seldom need to use the city bus, but it is there should you need it. More likely you will use buses in Japan for inter-prefecture travel. Bus companies offer ridiculously low prices for ‘over night’ bus trips between cities. A favorite is the Osaka – Tokyo Midnight Bus, where companies charge the one way trip at as little as 3500 yen. However! Be warned! The seats are small indeed! You can pay extra for larger seats however. If you can’t afford larger seats then you must prepare yourself for a 7 hour ride of discomfort and restlessness (in the case of Osaka to Tokyo)

Midnight buses typically take a fifteen minute break every two hours, with the driver making sure to wake you up by announcing the break on the bus PA system. The only upside about the breaks is that they are at rest stops where you can use the bathroom, buy food, snacks, magazines, etc etc.

Out of all the bus companies, you’ll find that Willer Express usually has the lowest rates:

Without a doubt the most expensive way to get around town, taking the taxi is not cheap. One mile can cost you as much as $20 USD.

Taxi drivers do not speak English, so you will have to give them your directions on a piece of paper in Japanese.

You’ll be able to find taxis at nearly any train station in Japan, waiting at the exit for commuters.

If you’re living in Japan there is a good chance you’ll be making some kind of regular commute. If that is the case then you are in a perfect position to save some dough by getting a ‘commuter pass’ for the ‘corridor’ that you travel!

Passes will usually end up saving you 30% what you would normally pay. For example instead of paying 10,000 yen a month buying tickets every day, you’d spend 7,000 yen and then have UNLIMITED use on that corridor!

Passes are for 1, 3 or 6 months. Of course you’ll spend more the longer the pass is. You do however get even more savings the longer you make your pass.

For example let’s say your daily commute costs 480 yen one way, and you take this commute 6 times a week. That would equal 5760 yen a week or 20340 yen a month (a month with 4 weeks. So you would end up spending close to $260 USD a month if you bought your tickets every day, with no pass.

But lets see how it breaks down if you start using passes:

As you can see, there are savings to be had.

If you hop over to http://www.hyperdia.com/ you can punch in your route, and it will not only calculate the time, fairs and routes, but it will also give you an estimate on what a commuter pass would cost for your route!

If you’d like to find out your fair, times or the best transportation routes check out Hyperdia: http://www.hyperdia.com/

It goes without saying that you’ll need to know your departing and arrival stations in order for the program to calculate.

Help yourself to our veritable buffet of Japan Train & Subway Maps!