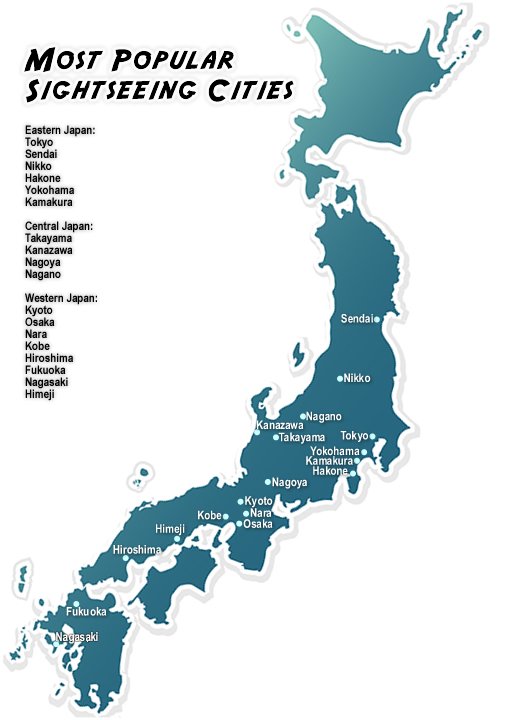 Similar to Nikko in the sense that it is one of traveler’s favorite day trips from Tokyo, Hakone is a top tourist spot for both visitors and residents in Japan (ranking high in the top ten). Key features are: Lake Ashi with the picturesque red torii gate on the shore line, the superfluity of renowned hot springs, mountain vistas and more... Hakone Travel Guide >>

Being just fifty minutes from downtown Tokyo, Kamakura is the closest day trip and incidentally the most noteworthy for those in Tokyo. If one had to choose between Nikko, Hakone and Kamakura the choice would clearly be Kamakura.

Kamakura is in fact so packed with sights to see that if one was just on foot it would take a few days. In light of this fact people often rent bicycles to enable them to be more mobile. Kamakura Travel Guide >>

Easily in the top ten of must see places in Japan, the locals of Nikko insist that if you haven’t seen their town then you have not yet seen beauty. This exemplified in their phrase: “Nikko wo minakereba "kekkō" to iu na”, which means just that. Nikko Travel Guide >>

Don’t let the fact that the 2011 Tohoku Earthquake and Tsunami devastated Miyagi Prefecture keep you from going to Sendai to see the sites and experience the culture (Quite on the contrary however, one should be interested in visiting any of the various disaster zones in Tohoku, in order to gain understanding and perspective. You can only appreciate it if you see it in person), as the city itself is inland and did not get destroyed or touched by the tsunami. There was some damaged from the earthquake but nothing large scale, and all has been repaired since. Sendai Travel Guide >>

Tokyo, the city of the Rising Sun, where you’ll find the pinnacle of technology and modern metropolis interspersed with districts of Traditional Tokyo, blending both skyscraper and shrine into a unique and unforgettable experience. Tokyo Travel Guide >>

Just a quick 30 minute rapid express train ride south of Tokyo is Yokohama, Japan's second largest city. The sightseeing and things to do all fall within the general downtown area; outside this zone you won't find much going on.

A relatively new city, Yokohama received its impetus as being a neighboring city to Tokyo, and became the largest port city in Asia in the 1900s. However after the Great Kanto Earthquake and WWII it was completely destroyed twice. But this has not stopped the city from rebuilding again and becoming a huge city and power house in the economy. Yokohama Travel Guide >>

More old world charm and beautiful scenery than you could possibly imagine nor digest, Kanazawa ranks as a top travel destination, and for good reason. Kanazawa’s unique landscape includes mountains, valleys, forests, and coast line, sitting between the edge of the Japanese Alps and the Sea of Japan.

Home to two national parks and what is considered the most beautiful garden in Japan (Kenrokuen Garden) it is easy to see why Kanazawa is ranks high in places to visit. Aside from the parks Kanazawa has the one-of-a-kind Shirakawago. This UNESCO World Heritage site has a hand full of villages, namely ‘ogimachi’, where you will swear you have stepped back three hundred years into the past, with rice paddies, farm houses over two hundred years old. Read on...

Thanks to the Winter Olympics of 1998 this small city enjoyed world wide exposure and interest. With just under 400,000 people Nagano sits snuggly in the mountains just North East of Takayama.

Nagano is most famous for its brilliant slopes in the winter time, where people come from all over Japan to zip down the mountain sides. Afterwards visitors go to the open air hot springs to thaw out. Read on...

While not typically thought of as a top place to visit in Japan, Nagoya is in fact an excellent destination for the traveler. Being the hub which connects Eastern and Western Japan, Nagoya is the fourth largest city in Japan and has a sprawling metropolis, with 2.2 million people in the city and 8.4 million in the greater metro area.

Aside from all the city related sites (the port, museums, towers, amusement park, Toyota) Nagoya has many traditional sights including the oh-so popular Nagoya Castle, Atsuta Shrine and Osu Temple. Read on...

Off the beaten path and nestled in the Japanese Alps, this small town has spent the last three hundred years going about its business and maintaining its traditions. Takayama effectively retains the old world charm and architecture which is seen in its shopping markets for instance.

The area is known for its exceptional craft works, from pottery to carpentry, with rumor that the carpenters of Takayama served at the Imperial Palace in Kyoto.

Takayama’s superfluity of authenticity makes it a favorite for travelers. Read on...

Fukuoka serves as the hub for the far West of Japan, being the largest city west of Osaka and is the center of civilization in Kyushu. The fact that the city is just a quick ferry ride away from neighboring South Korea has made it a popular destination for travelers coming from other parts of Asia, including China, Taiwan and Korea.

The city itself has gained a reputation for having lots of open clean space, with a considerable amount of greenery. Fukuoka is home to one of the largest Ferris Wheels in the world as well Japan’s much loved Tonkotsu Ramen, where you can find in abundance. Read on...

One of Western Japan’s prized jewels, Himeji Castle stands strong over six hundred years after its construction. It has miraculously survived WW II bombing which destroyed over half of the city of Himeji. It is Japan’s largest and most visited castle, and is rightly a UNESCO World Heritage site.

The main feature of Himeji is no doubt the castle; however there are also some other sights, including gardens and temples. The castle is a quick 60 minute train ride East from Osaka, and 45 minutes from Kobe. Read on...

Despite being completely destroyed in 1945, Hiroshima has rebuilt and now rivals Osaka with over 2 million residents in the metro area. Hiroshima like Osaka is well known for its delicious cuisine and warm friendly people. It is arguably the home of traditional Japanese dish ‘okonomiyaki’, a savory vegetable pancake, topped with a zesty sauce and mayo.

The most popular attraction in the city is the ‘Hiroshima Peace Museum’, which features among many things a damaged domed building which withstood the atomic blast. There is also a museum where people can connect to the past and gain an understanding and insight about what happened there. Read on...

This port city identifies more closely to a modern western city as opposed to other cities in Japan, with not much in the way of traditional sights (ironically Kobe has a higher population of foreigners than other cities in Japan). Kobe is known among other things (like legendary Kobe Beef) as a beacon of the latest fashion and shopping. When visiting Kobe one must check out the Port, where you’ll find excellent eating, shopping and scenery. Read on...

Synonymous with the word ‘sight seeing’ Kyoto is hands down the most visited city for tourism in Japan. This is to such an extreme that the Japanese themselves joke that the population of Kyoto is fifty percent kids on a school trip and fifty percent Buddha statues.

Visitors come to Kyoto for its plethora of temples, shrines, gardens and scenic walks. The city also offers much in the way of authentic dining and traditional entertainment such as the beautiful and mysterious Geisha, whom you can see walking on the street. Read on...

This port city sits near the southern most tip of Japan, being south of Fukuoka. Despite being completely destroyed in 1945 by atomic bombing, the city was rebuilt and took back its place as a window into the West (as the city is a receipt point for Asian and European trade). Like many other cities in Kyushu, Nagasaki is known for its excellent local cuisine with dishes like Karasumi and Sara Udon.

Aside from delicious eating the city has no shortage of temples and shopping. One of Nagasaki’s more popular sights is the Atomic Bomb Museum, which stands on the hypocenter of the blast and showcases photos, relics and the history of the event. Read on...

Japanese purists maintain that Kyoto is for tourists and Nara is for the real explorers and admires of traditional Japanese history and culture. Founded on this is the fact that Nara was the capital of Japan before Kyoto and that Nara has indeed some very ancient and impressive temples and features.

Nara is also less ‘touristy’ than Kyoto, and offers a no frills, raw look into ancient Japan. Key sites to see include Toudaiji and Heijyou Kyuu. Read on...

Aptly named ‘Japan’s Kitchen’, make sure you fast before you embark to Osaka as you will glutton yourself stupid in sampling some of Japan’s best street food.

Osaka is conveniently 30 minutes away from Nara, Kyoto and Kobe, putting it right in the center of the action. Sight seeing includes Osaka Castle, Shinsaibashi, Tsutenkaku and others. Read on...