The JR line is essentially a network of different trains and lines all run by the JR company throught Japan. Each line has its own name, color coded line and color coded train. For instance one of these lines is the Yamanote Line and it has as its color lime green, and its trains have a single lime green strip. TheYamanote runs in a complete circle around Tokyo. Another is the Chuo Line which runs right through that circle (east to west). And then there is the Saikyo line which runs north to south, and the list goes on.

The more lines a station has the larger and more complex the station will be. Think of a train station as just a collection of seperate train stations, one for each line that meets at that station, all coming together at the same location, so the passengers can get off or switch to a different train, which goes in a different direction.

Larger stations have more exits and its easier to get lost. Typically a station is split up into either: North, South and Central exits. Or East, West and central. Each of these main exits then also has multiple sub exits. To avoid getting lost all you have to do is observe the yellow signs on the ceiling, they clearly state which exit is in what direction. Often near the entrances/exits there will be a large chart on the wall which shows a map of the station with notations for all exits and surounding areas. 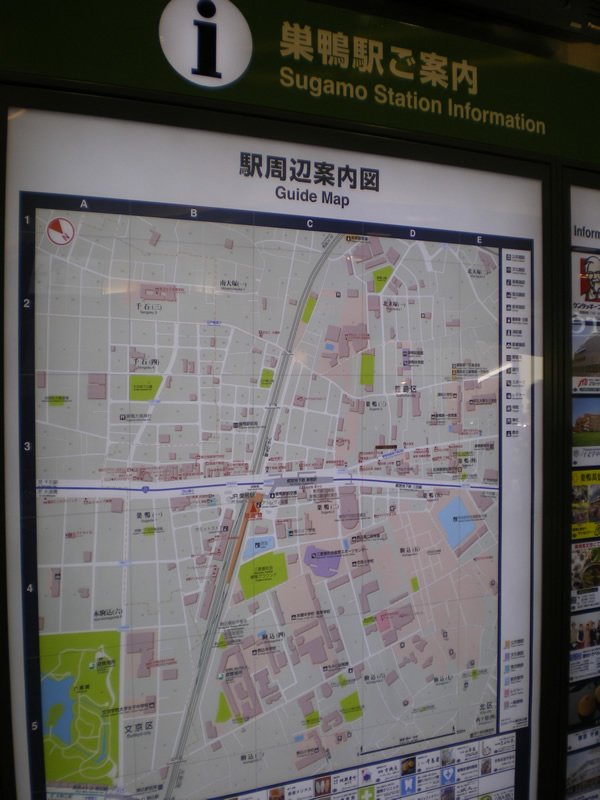 All JR stations have a large map usually 4x4 feet posted either inside or outside the Exits/Entrances. The map has the station in the center and all roads, parks and points of interest within a certain radious.

These maps are not only useful for finding your way outside the station but you can use them to find points of interest and great spots for tourism. As you can see in the example its pointing out the location of two Museums.

JR stations usually will have a subway undergound nearby where you can transfer. Some are so small that there is no acompaning subway, and some are so large that there are many. For example Ikebukuro station has three different subway lines, in addition to the three different JR train lines which converge at the station.

Subways are not run by JR, they are operated by the Tokyo Metro company. There are over tweleve seperate subway lines which run through and about Tokyo. And like the JR line, each has its own color code.

Now its time for an orientation of a JR train station. This is simple orientation which only covers the surface, the purpose is to just give you an acqaintance. After reading this you should move on to the Field Trip - Otsuka to Sugamo, step by step, to see how it all ties together. 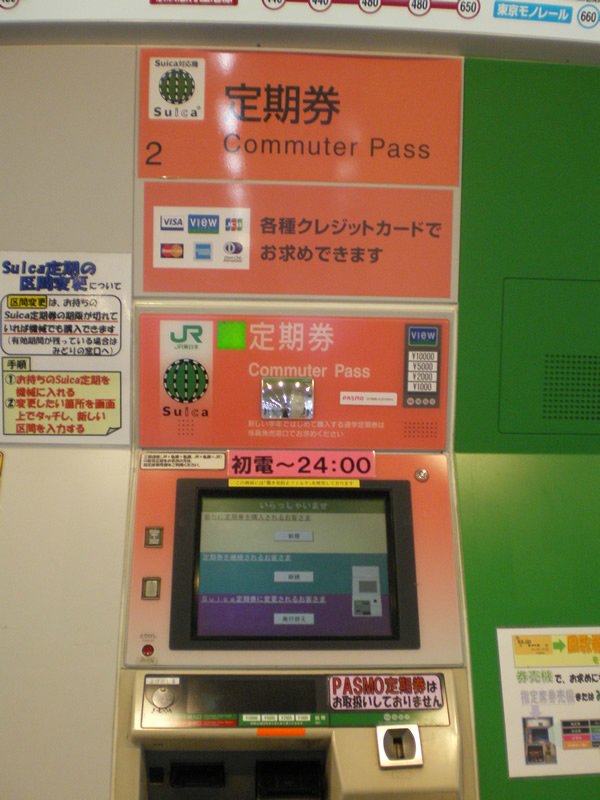 This is the Commuter Pass machine. 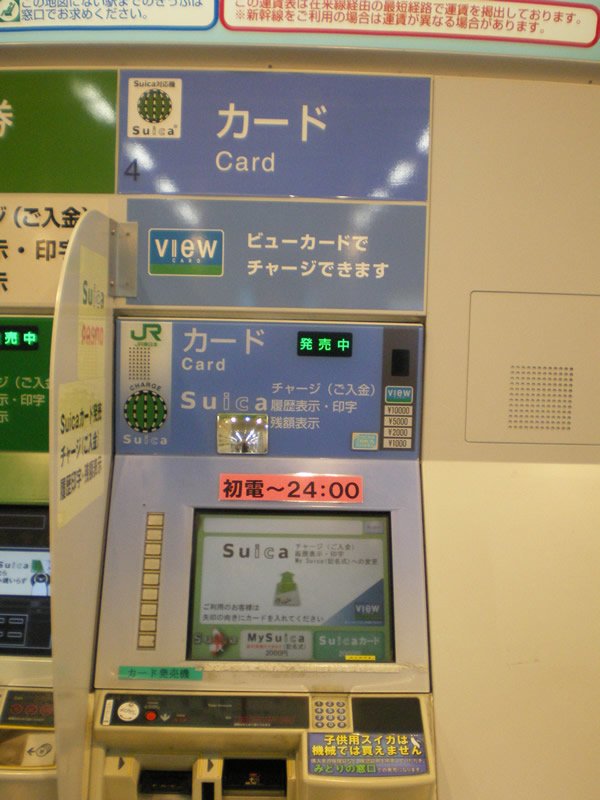 This is the Card Machine. 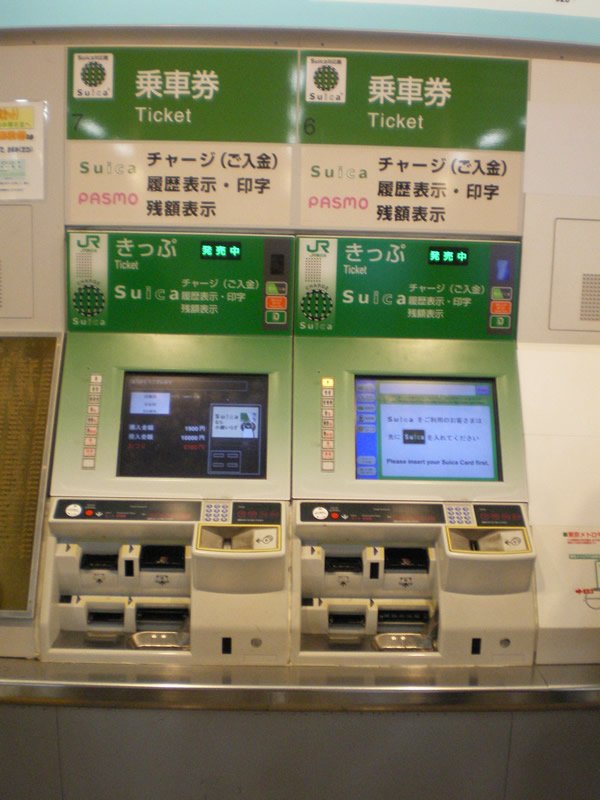 This is the JR Ticket Machine, the one you'll be using. These machines are always Green. 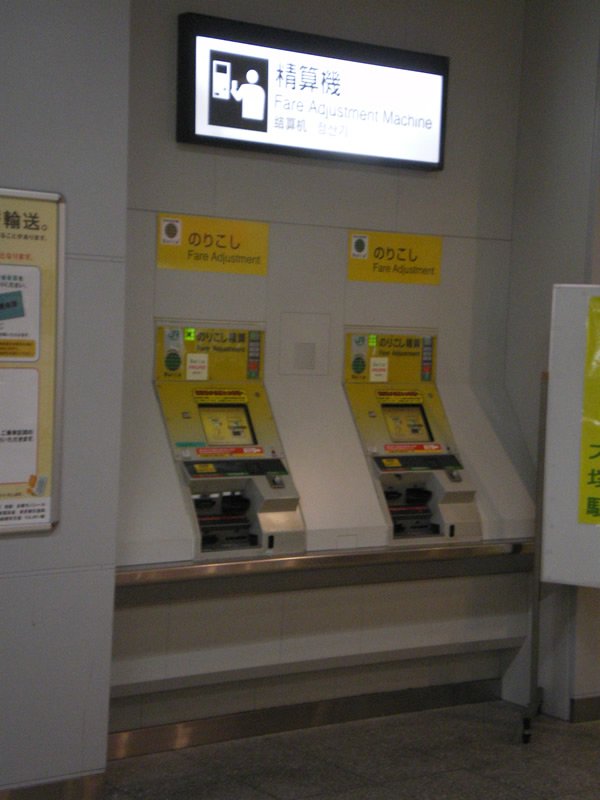 These are fair adjustment machines. If you traveled past the fee you payed for, or if you want to increase the 'travel range' of your ticket, you can go here, insert your ticket, press 'english' on the screen and follow the prompts. 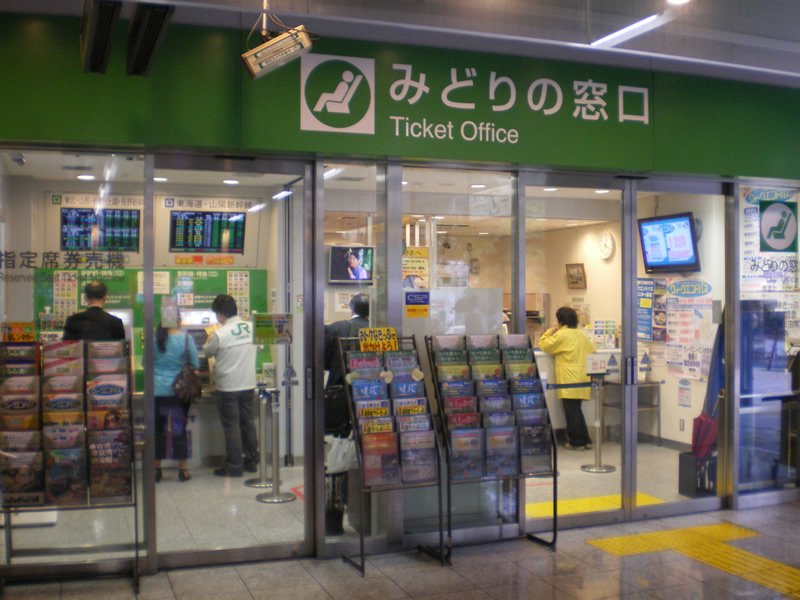 This is the Ticket Office, you can go here if you need help. 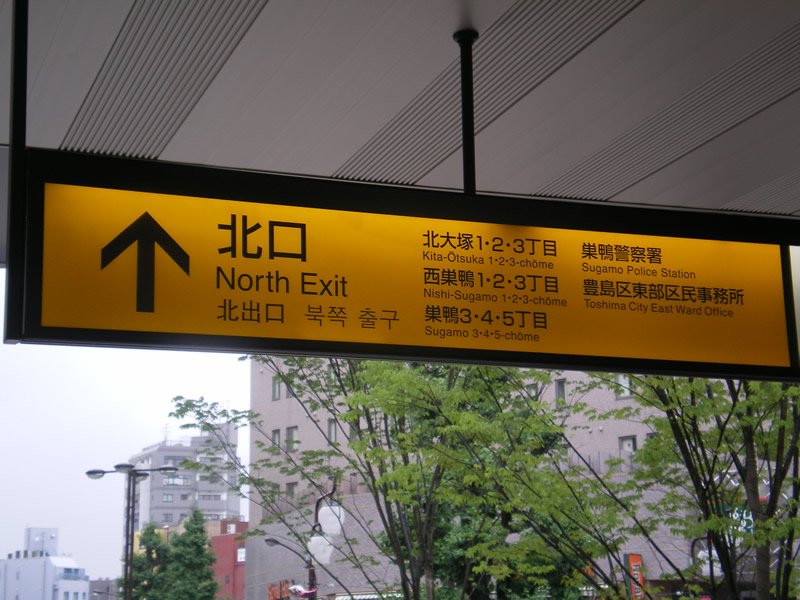 This is an Exit sign. For the North Exit. Notice it has an arrow pointing in the direction you should go. And on the right side of the sign it lists various locations and buildings you will find nearby. 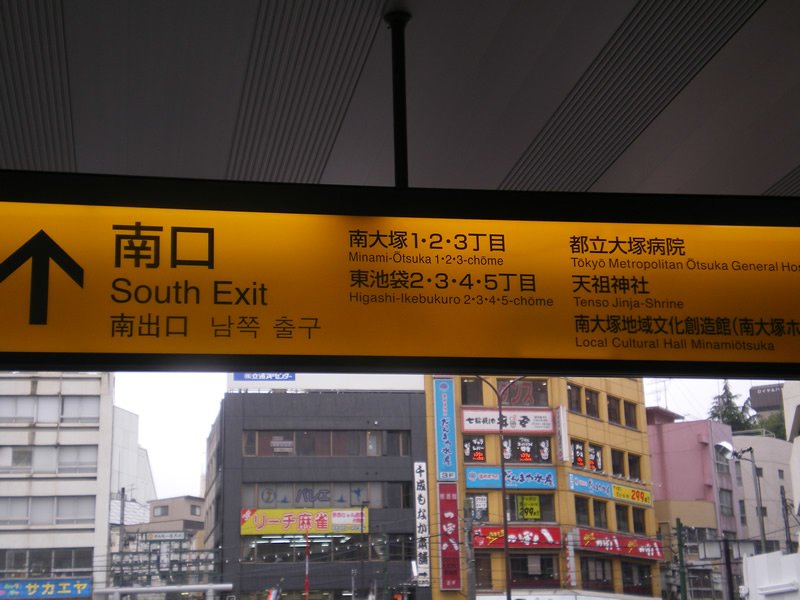 Here is a South Exit. It also lists some of the nearby locations. Note: Not all stations have a North and South Exit, some may have an East and West. 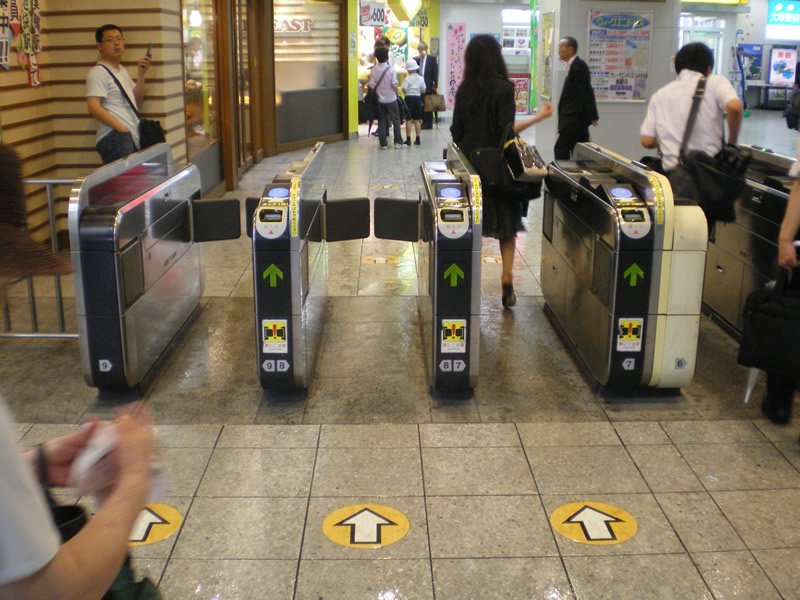 This is the Ticket Gate or Ticket Barrier. Notice the green arrows, these indicate that you are on the right side of the gate and can walk through. Also note the arrows on the ground, they indicate the direction of the foot traffic. 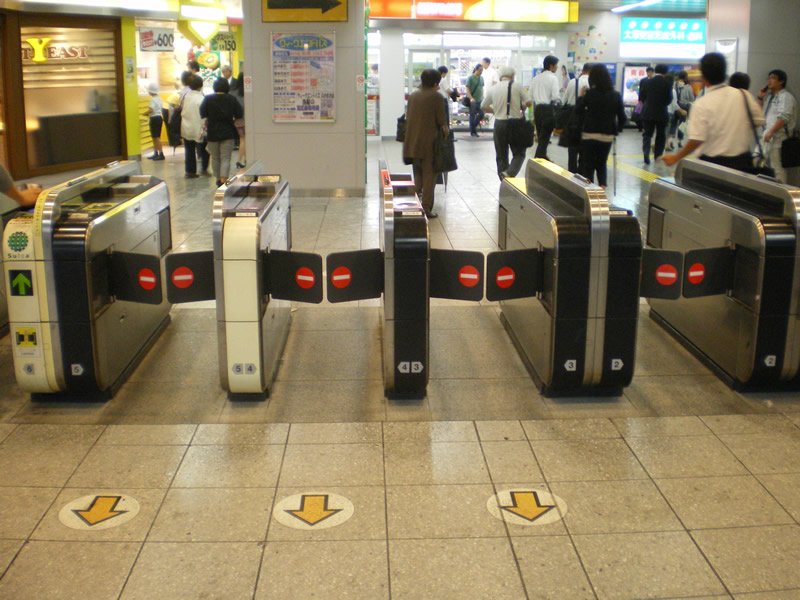 This is also the Ticket Barrier/Gate, notice the red Do Not Enter signs, this is for passengers coming in the opposite direction. Again note the arrows on the ground, indicating the direction of the foot traffic.

A close up on the Ticket Gate, This particular one only accepts the Suica Pass Card. You place it down flat on the glowing blue surface and it opens the gate. If you have a ticket you must use a different Ticket Gate. See next figure. 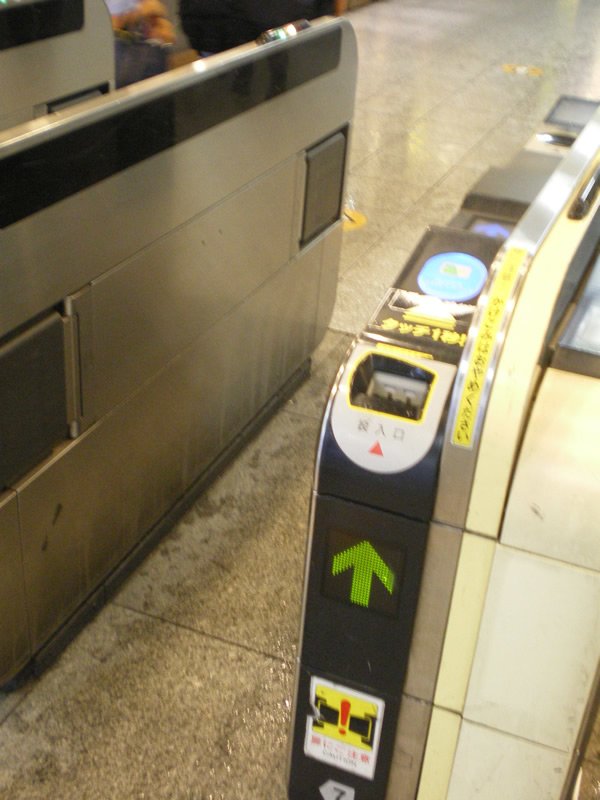 This Ticket Gate accepts tickets and the Suica Pass. 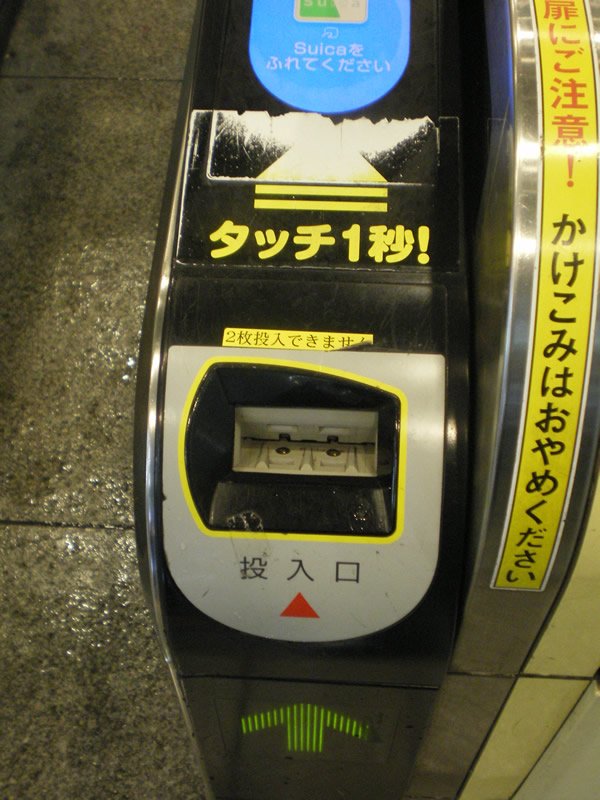 A close up, notice the red arrow indicating where to slide your ticket in. 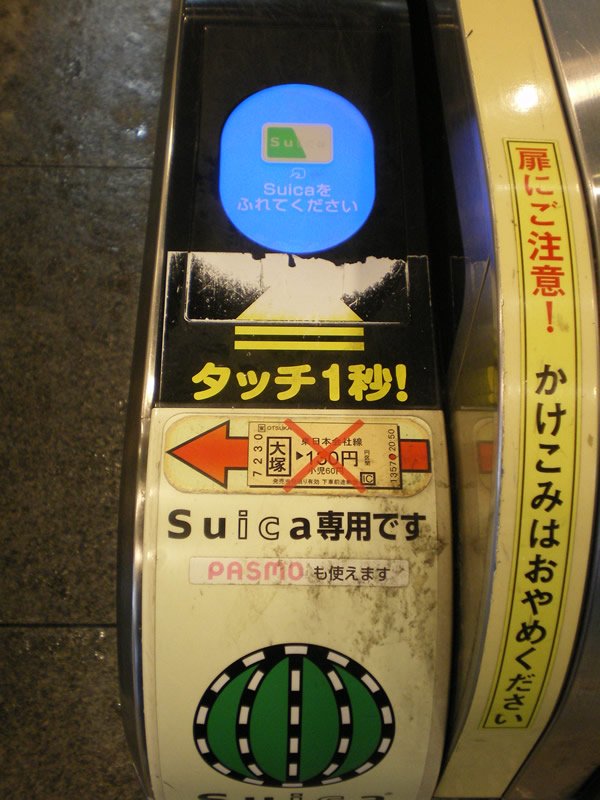 A close up on the Suica Pass only ticket barrier. 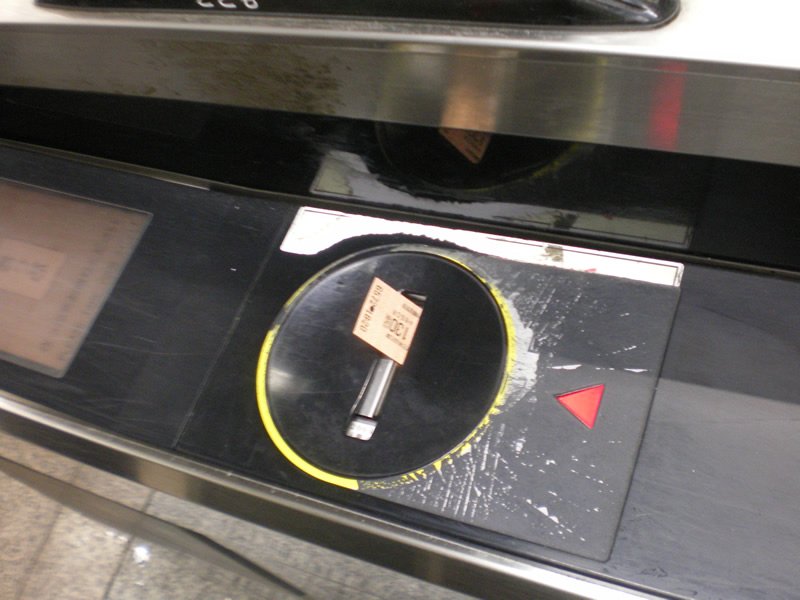 After you slide your ticket in, the machine will grab it, and then it will pop out from the opening in this figure. 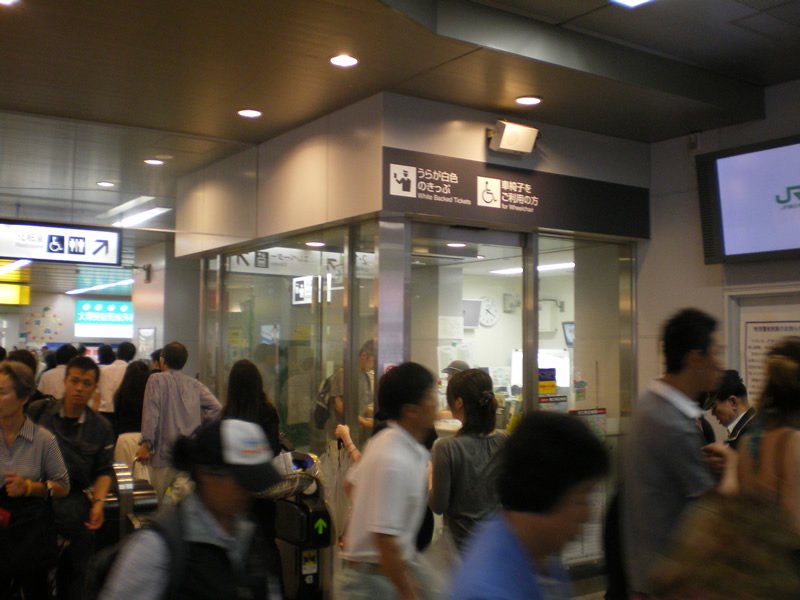 This is an information office located right on the side of the ticket barriers, if you have any trouble with the ticket barriers, the staff inside can help you. For example, if you bought a ticket for 150 Yen, but you travelled to a station that costs 190 Yen to get to, when you put your ticket in the machine it will not open because your trip costed more than what you paid. At this time you can step over to the booth and explain what happened to the staff, give them the balance and you're all ste. They usually can speak english. 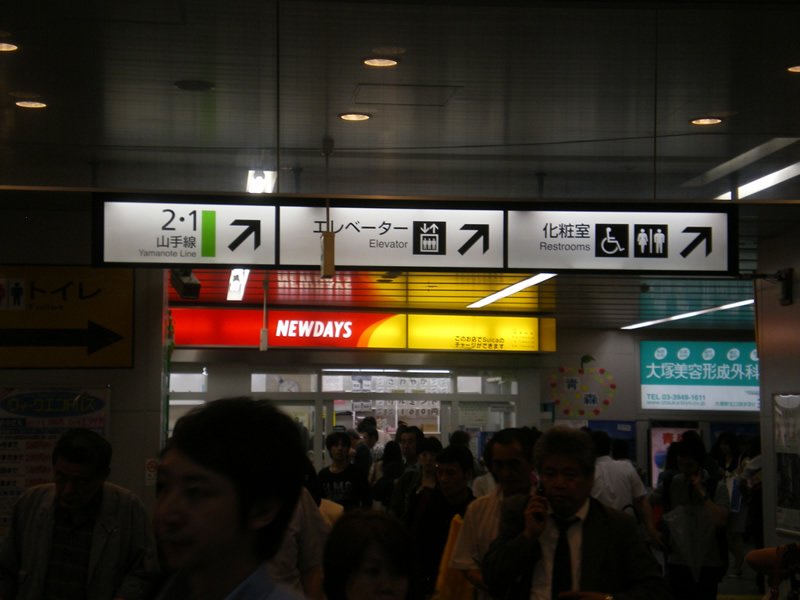 After passing through the Ticket gate you will find valuble info on the signs overhead. These signs indicate that platforms 2 and 1 for the yamanote line are ahead and to the left. 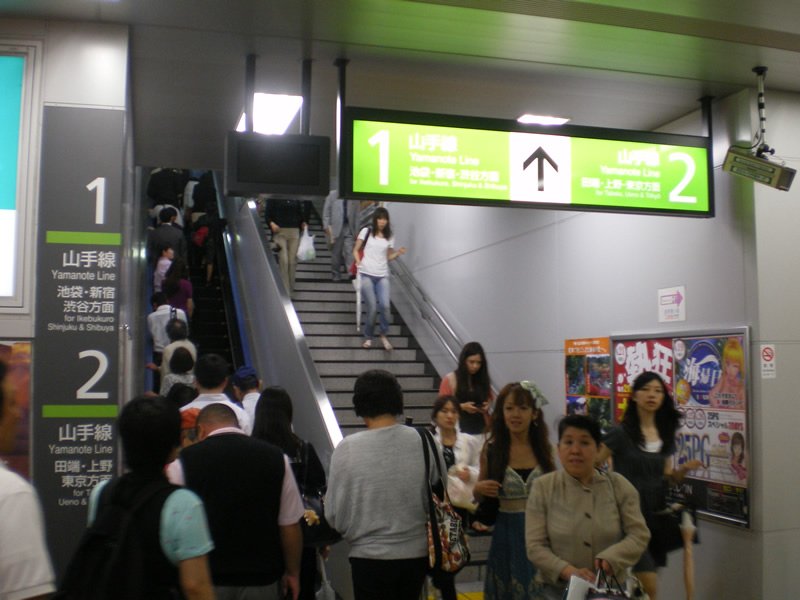 After passing through the ticket barrier, follow the signs overhead and locate your plat form. Notice that Platform One is for: Ikebukuro, Shinjuku and Shibuya. Where Platform Two is for Tabata, Ueno and Tokyo. 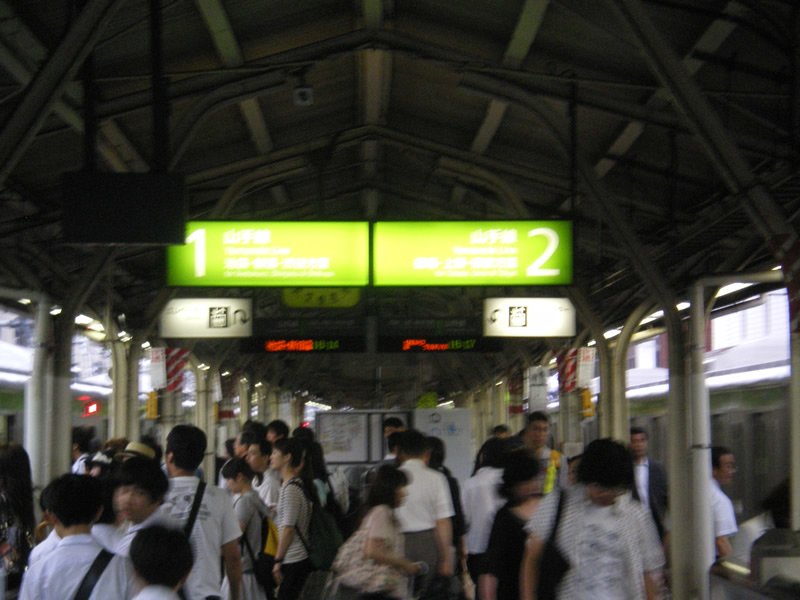 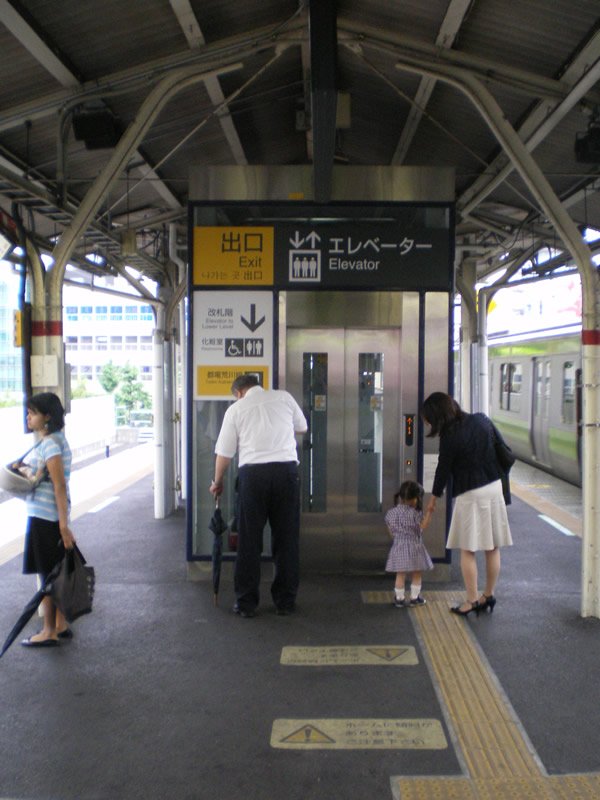 Here is a handy elevator which you can use if you're lazy or if you have lots of baggage. 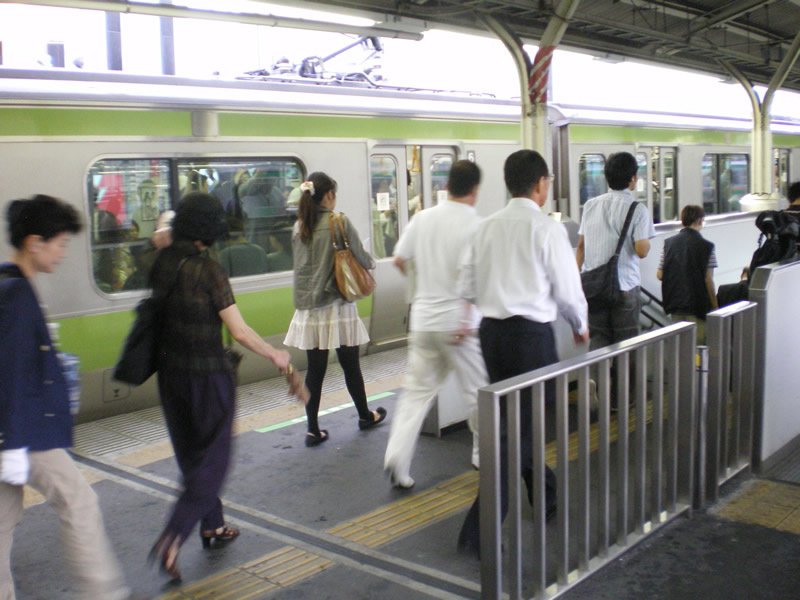 Time to hop on the train. 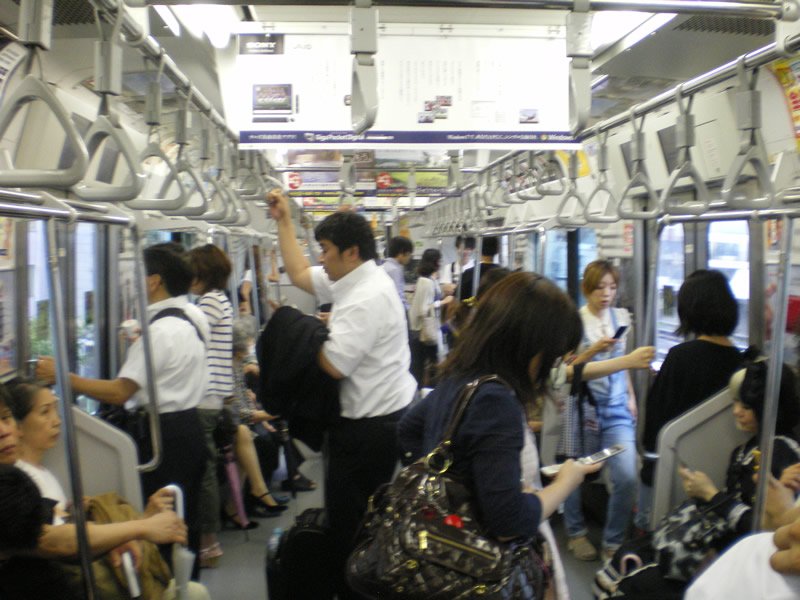 You're on the train.