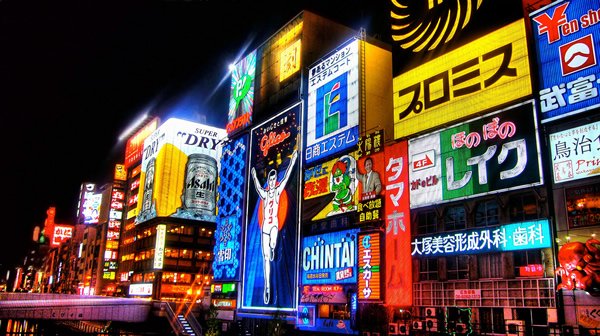 Uh oh! I hope you're ready for this! We are going to have some fun! Osaka-ben or Osaka Dialect is a super fun form of Japanese.

Some of this will be just plain and common Osaka dialect, and some of it will be Osaka slang. For the purposes of this article we are not going to bother differentiating.

Take the standard Japanese 'ii yo' and Osakify to: 'ee de'. You can also use 'ee yo' which is a little more youthful sounding.

Instead of saying 'really really' you can say 'mecchakuccha'. But when you speak it don't say mecchakooocha, say: mecchakuhcha.

Hey! Thanks as always!
(maido maido!)

This phrase is used by shop owners or business men when greeting their customers. However, anyone can use it whenever they see a friend, as a greeting. Its like saying: "hey there!" but in a goofy way.

This is not used so much by the youth. It is used by older Japanese, and shop staff. It literally means "greatly" (ooki ni). It is used to mean "thank you, greatly". It is used by shop owners to thank their customers. If a foreigner uses it laughing will ensue!

You have to say it super fast, in under a second. 'chau' is the Kansai version of 'chigau' which means: wrong/different. If you use it three times in a row, with some emphasis it is like saying: no no no!

Don't be like everyone else and say: ohayou gozaimasu. Instead, get your Osaka on and do: ohayou-san! People will enjoy.

If you're exhausted, just beat, or tired you can say: shindoi~~~~. In Kanto you would say: tsukareta~.

In Kanto 'really' is 'honto ni', in Osaka and Kansai it is: 'honma ni'. We can take just the 'honma' which means 'real', and make it like this: I'm real sorry. This is really good, but it is very casual. You should use it with friends.

What are you talking about?
(nani iu tennen?)

If you say this it has a feeling of ridicule or surprise. You can say this when someone says something weird or stupid.

This one is absolutely hilarious. In standard Kanto you would say: ‘yoroshiku onegaishimasu’, which roughly means: “please treat me well”. In Kansai they have their own version and it is: ‘Yoroshuu tanomu wa’ which has the same meaning but way more casual and non-serious. The Japanese themsleves rarely use it however.