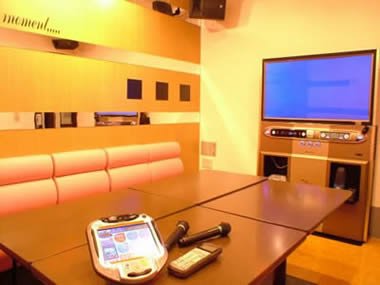 If you’re living in Japan and want to keep life from becoming too hum-drum, you’ll want to indulge yourself in the country’s rich entertainment offerings, which span from Karaoke to Kabuki.

Karaoke is the Starbucks of Japan, in that they are on every street corner and are frequented regularly. But not necessarily for singing! Some people go to karaoke for business meetings, hanging out or even making out.

Karaoke establishments look like small narrow apartments, you will be greeted at a lobby and then take an elevator or stairs to your karaoke room, which will be rather small, or larger if you have more people.

However, hourly pay is not the only option. For those who want to spend at least three hours singing you can pay a flat fee for the whole night, say $25. However, each person has to pay the fee. Therefore if 4 people want to do an all-nighter it will cost $100 total.

If karaoke wasn’t fun enough already, you can also gorge to your hearts content on your favorite foods! Not only do they have all the traditional fare, they also have a wide assortment of American favorites. Such as: chicken fingers, buffalo wings, pizza, French fries, ice cream parfait etc etc. However be warned, food at Karaoke is a little on the expensive side.

Fortunately for foreigners, Karaoke rooms are equipped with a Japanese and English song reference. So you can find all your songs by artist or title. Along with your song book you will also usually get a tambourine or two, so you can get the party started.

Song selection is typically good in Japan, the more expensive and newer the establishment is the better their selection is. They have all the big hits from the US, plus some lesser known music, but nothing too obscure. All in all you will be surprised at what they do have. Bands like Reel Big Fish, The Smiths, Bad Religion, etc can be found.

Aside from contemporary and hits, there is an overwhelming presence of oldies and classics, like the Beatles, Rolling Stones, Elton John, Billy Joel etc etc.

Plop in a few hundred yen in this vertical pinball type looking machine and then drop in the steel balls it gives you, pull back the ejector and let them fly! The steal balls will fly around bouncing off pins and barriers, and if you’re lucky it will activate some special switches, and out will come more steel balls for your reserve! The object: get as many steel balls as possible! You can then take the balls and exchange them for prizes. From the mundane (notebooks) to state-of-the-art (iPad) there is a tremendous variety of goodies. (however the balls cannot be exchanged for money, doing so would be illegal)

Pachinko parlors are found in every city no matter the size. They are impossible to miss as whenever their automatic doors slide open a deafening wave of cheesy electronic game music crashes out into the streets. This tsunami of sound becomes tolerable if you have been inside long enough, once you’re desensitized to it.

Japan has arcades just like the USA, however they are referred to as game centers. The games are similar, however there are some uniquely ethnic games, such as the Taiko Drum.

Another thing Japanese arcades have are little photo booths where people can go to take group photos and get their faces automatically photoshop’d/air brushed. This is a tradition of Japanese school girls.

For those who feel arcades and singing are too juvenile, you can join the millions of Japanese who after work go to unwind at the ‘izakaya’. The Izakaya is nothing more than a restaurant with a wide variety of standard Japanese & foreign foods, but with emphasis on alcohol. In short, people go to Izakaya to get drunk.

During the summer time you can participate in the many Natsu Matsuri (Summer Festivals) that are held in every city. There will be traditional food sold at stalls, and then entertainment on stages, with dancing performances, comedy, and other entertainment. There is no admission, and the prices at the food stands are rather affordable. Additionally there are may be stands which sell traditional hand-made arts and crafts.

Albeit few and far between there are movie theaters in Japan. If you are in a city of any mention you will have at least one. There is usually a balance of 60% Hollywood films vs 40% domestic. So you can rest assured that you’ll find Hollywood new releases. And what’s more they will be in English with Japanese subtitles, so you’ll be able to enjoy them to the fullest. The only thing you won’t enjoy is paying $20 for your movie! (Which is what it costs in Tokyo).

Say goodbye to your Netflix and Blockbusters, and say hello to Tsutaya, Japan’s one stop shop for buying and renting DVD’s & music. It doesn’t stop there, they are also a full on bookstore. It’s like Barnes & Nobles meets Blockbuster, but minus the cafe.

If you want to get some kicks but don’t want to pay for it, you can avail yourself of Japan’s highly entertaining street performers. (however you’ll need to live in a major city in order to have a ‘downtown’ large enough to attract street performers)

You’ll see everything from bands with full PA systems, to performers juggling knives whilst balancing on a see saw.