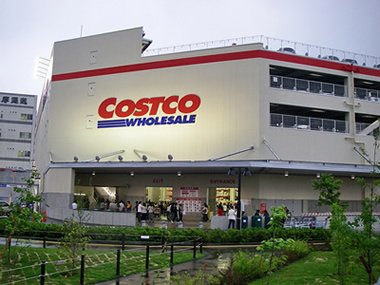 If you’re moving to Japan and you’re getting your own home or apartment you’re in for a good measure of culture shock, especially if you grew up in the US or Canada.

All of your home goods shopping in Japan will be done at the mall. Although there are a few Ikea’s and Costco’s around, they are few and far between and are NOT at every city. If you have one in your vicinity by all means check it out and take advantage of the savings.

Arguably, one of the worst things about living in Japan is the total dearth of kitchen appliances in the Japanese apartment. In fact there are NO appliances to be found at all.

No fridge, no oven, no stove, no toaster, no microwave, no washer, no dryer. And possibly no heater or air conditioning (depends on the apartment). What this means is you will end up paying dearly when you are first establishing yourself.

But before you buy your full range stove and big aluminum fridge, know that these standard American appliances will not fit in the typical Japanese apartment.

Unless its a big apartment, it will only fit a half sized fridge, priced at around $350. For a stove top the most you can expect to fit would be a dual gas or ceramic burner which come in around $200 (You can also buy individual ceramic or gas burners for $50-$100). Newer apartments typically come with a single ceramic stove top.

For ovens, be prepared to spend $500 US for an oven the size of a large microwave, you won’t be finding full sized ovens in Japan unless you’ve got a very big apartment/home and a lot of money.

As for toaster ovens and microwaves, you’ll be pleased to find that a microwave comes in at around $100 USD, and a toaster oven at $30.00. Also, traditional ‘bread slice’ toasters range between $13-$30.

The inadequacies of the Japanese living space continue with the absence of central heating and air conditioning. However, if your apartment is new enough (built in the 90’s) it will have one air conditioning unit (that may only provide cool air)

The Japanese AC is a plug in unit which is placed on a wall just below the ceiling. They are about three feet in width, 8 inches in depth and 8 inches wide and cost anywhere between $200-$1000 USD (unfortunately Japan doesn’t have built in ceiling fans)

It should be noted that the operation of these AC units is rather expensive, and to use them for heating purposes is rather expensive. Come winter time you will save a considerable amount by getting flour gas heater. You will have to re-fill the gas tank every 2-3 days however.

Flour gas-powered heaters vary in size and price. Small models starting around $100, and larger models up to $400.

Infrared portable electric heaters are also available, and cost around $40 USD, but will cost much more in electricity costs in the long run.

Televisions are noticeably more expensive in Japan. For example a 19 inch flat screen will cost close to $300, and a 32 inch will be close to $500.

The concept of Japanese bedding deserves some mention here. Once again, depending on the size of your domicile and bedroom it will determine if you have a full bed frame and mattress or a roll out futon.

A roll out futon with mattress cover and blanket will cost you around $90 USD. It will come in its own big plastic zipped bag.

Keep in mind that some bedrooms are so small that putting a full bed frame would be unwieldy and take up too much space. In which case you just roll out your bed at night and pack it up in the morning. This is very common in Japan.

Deserving its own section is the Japanese Heated Table or Kotatsu. It is a large and low square table, roughly 3 feet on each side. Fixed to the underside of the table is a heater, with grating to protect from burns. The table & heater cost around $100 US at the very lowest end. Come winter time you can get special kotatsu blankets which envelop the whole table, creating a little oven inside. Therefore those sitting at the table can slide their legs under and warm up in a most enjoyable way!

The Kotatsu is usually placed in the living room or dining room. And is used for everything from eating to home work.

One of the horrors you must brace yourself for is the traditional Japanese toilet, should you be so unfortunate to happen across one. If your apartment is relatively new (made in the 90’s) you will have a standard western toilet. If your apartment was made in the 2000s you may even have a fancy electronic Japanese toilet, complete with a heated seat, ventilation, and bidet.

If you should be so unfortunate to have an apartment with an old style Japanese toilet, fear not you can replace it with a new one but at a price! Be prepared to spend $1200 USD for a modern Japanese toilet. So save yourself the trouble and get an apartment that doesn’t require such an expensive renovation.

Following along with the Japanese tradition of ‘small’, you wouldn’t be surprised to find that most apartments are only equipped with a shower, and no bathtub. And if your apartment is old enough it won’t even have heated water! Be warned! It may be that every time you want heated water you have to open the gas line, turn on and ignite the furnace, and then switch on the water in the kitchen or shower, and then close the gas valve when you’re done. Keep in mind this is a very old set up and is not as common these days, but make sure you check. If your apartment was built in the 90’s then you should be fine.

There isn’t much to be said about Japanese office furnishings and the home office in general however it should be noted again that depending on the age of your apartment there may not be internet present. This is only a minor set back as once telephoned the Telecomm company will have it installed and rolling for you within seven days.